The Making of a Justice: Reflections on My First 94 Years (Hardcover) 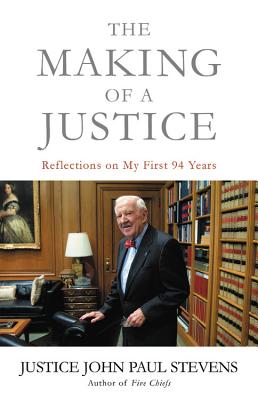 By Justice John Paul Stevens
$35.00
Email or call for price.

A "timely and hugely important" memoir of Justice John Paul Stevens's life on the Supreme Court (New York Times).
When Justice John Paul Stevens retired from the Supreme Court of the United States in 2010, he left a legacy of service unequaled in the history of the Court. During his thirty-four-year tenure, Justice Stevens was a prolific writer, authoring more than 1000 opinions. In The Making of a Justice, he recounts his extraordinary life, offering an intimate and illuminating account of his service on the nation's highest court.
Appointed by President Gerald Ford and eventually retiring during President Obama's first term, Justice Stevens has been witness to, and an integral part of, landmark changes in American society during some of the most important Supreme Court decisions over the last four decades. With stories of growing up in Chicago, his work as a naval traffic analyst at Pearl Harbor during World War II, and his early days in private practice, The Making of a Justice is a warm and fascinating account of Justice Stevens's unique and transformative American life.

Justice John Paul Stevens served on U.S. Supreme Court from 1975 until his retirement in 2010. He is the third-longest serving Justice in American history. Born in Chicago, Illinois, in 1920, Stevens served in the United States Navy during World War II and graduated from Northwestern University School of Law. He was appointed to the Seventh Circuit Court of Appeals in 1970 by President Richard Nixon and to the Supreme Court in 1975 by Gerald Ford. He was the author of two other books, Five Chiefs and Six Amendments. Justice Stevens passed away in 2019.

"Studded with cameos by boldface names...The new book lays out his philosophy through example, through cases and events that influenced his thinking."—Jess Bravin, Wall Street Journal

"A compelling look back at a fascinating life and career."—Mackenzie Dawson, New York Post

"Provides much food for thought for law students, lawyers and those interested in the legal underpinning of our present national mess."—Neil Steinberg, Chicago Sun Times

"The inspiring legacy of Justice John Paul Stevens-including both the brilliance of his mind and the humaneness of his character-are well represented in his last book, The Making of a Justice." —New York Review of Books

"The memoir is a tale of a privileged childhood in Chicago, the ravages of the Great Depression and a family scandal, service as a wartime cryptologist and a charmed legal career as a Supreme Court clerk, appeals court judge and the third-longest-serving justice in the court's history."—Robert Barnes, The Washington Post

"To be 99 years old and still writing, in itself, merits acclaim. And a memoir by Justice John Paul Stevens, whose almost 35-year tenure on the U.S Supreme Court helped spur vast changes in American society, has indisputable historical value."—The Chicago Tribune

"Former Justice John Paul Stevens spent 35 years on the Supreme Court, writing some of its most important decisions. At age 99, he is still writing, including a new memoir, and weighing in on prominent U.S. issues today."—PBS Newshour

"Stevens' illumination of the court's internal processes, accounts of cases, and often caustic opinions of its results form an important contribution to legal literature."
—Booklist

"The retired Supreme Court justice chronicles his impressive life story, including his 34-year tenure with the court...The author's consistently absorbing commentary on a wide variety of legal cases will require close attention by readers, but the payoff is worth it."—Kirkus