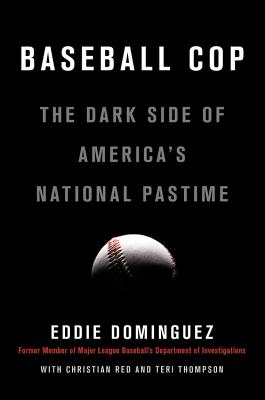 By Eddie Dominguez, Christian Red (With), Teri Thompson (With)
$28.00
Not in stock at store. Will, in most instances, ship from our warehouse in 7-10 days

Exposing trafficking, theft, fraud, and gambling in the major leagues, a founding member of the MLB's Department of Investigations reveals a news-breaking true story of power and corruption.

In the wake of 2005's sometimes contentious, sometimes comical congressional hearings on performance-enhancing drugs in baseball and the subsequent Mitchell Report, Major League Baseball established the Department of Investigations (DOI). An internal and autonomous unit, it was created to not only eliminate the use of steroids, but also to rid baseball of any other illegal, unsavory, or unethical activities. The DOI would investigate the dark side of the national pastime--gambling, age and identity fraud, human trafficking, cover-ups, and more--with the singular purpose of cleaning up the game.

Eduardo Dominguez Jr. was a founding member of that first DOI team, leaving a stellar career with the Boston Police Department to join four other "supercops"--a group that included a 9/11 hero, a mob-buster, and narcotics experts--keeping watch over Major League Baseball.

A decorated detective as well as a member of an FBI task force, Dominguez was initially reluctant to leave his law-enforcement career to work full-time in baseball. He had already seen the game's underbelly when he worked as a resident security agent (RSA) for the Boston Red Sox in 1999 and become wary of the game's commitment to any kind of reform. Only at the persuasion a widely respected NYPD detective tapped to lead the DOI did Dominguez agree to join the unit, which was the first--and last--of its kind in major American sports. "We could clean up this game," his new boss promised.

In Baseball Cop, Dominguez shares the shocking revelations he confronted every day for six years with the DOI and nine as an RSA. He shines a light on the inner workings of the commissioner's office and the complicity of baseball's bosses in dealing with the misdeeds compromising the integrity of the game. Dominguez details the investigations and the obstacles--from the Biogenesis scandal to the perilous trafficking of Cuban players now populating the game to the theft of prospects' signing bonuses by buscones, street agents, and even clubs' employees. He further reveals how the mandates of former senator George Mitchell's report were modified or ignored altogether.

Bracing and eye-opening, Baseball Cop is a wake-up call for anyone concerned about America's national pastime.

After a decorated career as a member of the Boston Police Department and an FBI task force, Eddie Dominguez joined MLB's newly formed Department of Investigations in 2008, where he went on to work for six years.

Christian Red is an award-winning sportswriter, most recently for the New York Daily News, and the coauthor of American Icon: The Fall of Roger Clemens and the Rise of Steroids in America's Pastime.

Teri Thompson worked as managing editor of the Daily News' sports section until 2015 and is the coauthor of American Icon and American Huckster: How Chuck Blazer Got Rich From-and Sold Out-the Most Powerful Cabal in World Sports.

"Ha[s] its share of stories to tell....amusing."
—Boston Herald


"Details the shocking revelations [Dominguez] discovered as a Resident Security
Agent for the Red Sox and as a member of baseball's Department of
Investigations -- gambling, age and identity fraud, human trafficking,
doping, domestic violence and disturbing cover-ups at the top of
baseball's hierarchy."—New York Daily News