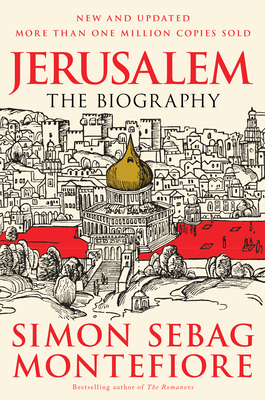 By Simon Sebag Montefiore
$21.00
Not in stock at store. Will, in most instances, ship from our warehouse in 7-10 days

“This is an essential book for those who wish to understand a city that remains a nexus of world affairs.” —Booklist (starred)

Jerusalem is the epic history of three thousand years of faith, fanaticism, bloodshed, and coexistence, from King David to the 21st century, from the birth of Judaism, Christianity, and Islam to the Israel-Palestine conflict.

How did this small, remote town become the Holy City, the “center of the world” and now the key to peace in the Middle East? In a gripping narrative, Simon Sebag Montefiore reveals this ever-changing city in its many incarnations, bringing every epoch and character blazingly to life. Jerusalem’s biography is told through the wars, love affairs, and revelations of the men and women who created, destroyed, chronicled and believed in Jerusalem. As well as the many ordinary Jerusalemites who have left their mark on the city, its cast varies from Solomon, Saladin and Suleiman the Magnificent to Cleopatra, Caligula and Churchill; from Abraham to Jesus and Muhammad; from the ancient world of Jezebel, Nebuchadnezzar, Herod and Nero to the modern times of the Kaiser, Disraeli, Mark Twain, Lincoln, Rasputin, Lawrence of Arabia and Moshe Dayan.

In this masterful narrative, Simon Sebag Montefiore brings the holy city to life and draws on the latest scholarship, his own family history, and a lifetime of study to show that the story of Jerusalem is truly the story of the world.

SIMON SEBAG MONTEFIORE is a historian of Russia and the Middle East. Catherine the Great and Potemkin was short-listed for the Samuel Johnson Prize. Stalin: The Court of the Red Tsar won the History Book of the Year Prize at the British Book Awards. Young Stalin won the Los Angeles Times Book Prize for Biography, the Costa Biography Award, and le Grande Prix de la biographie politique. Jerusalem: The Biography was a worldwide best seller. Montefiore’s books are published in more than forty languages. He is the author of the novels Sashenka and One Night in Winter, which won the Paddy Power Political Fiction Book of the Year Award in 2014. A Fellow of the Royal Society of Literature, Montefiore graduated from Cambridge University, where he received his PhD. He lives in London.

"Spectacular. [Montefiore] really tells you what the life of the city has been like and why it means so much. You fall in love with the city. It's a treasure. It's a wonderful book."
—Bill Clinton, #1 Holiday Book Pick on the Today show

"Magnificent. . . Montefiore barely misses a trick or a character in taking us through the city's story with compelling, breathless tension."
—Wall Street Journal

"A powerful achievement. . . . At once a scholarly record and an exuberantly written popular tour de force."
—New York Review of Books

"Magisterial. . . . As a writer, Montefiore has an elegant turn of phrase and an unerring ear for the anecdote that will cut to the heart of a story. . . . A joy to read."
—The Economist

"Already a classic. Jerusalem is an extraordinary achievement, written with imagination and energy. . . . Simon Sebag Montefiore tells this modern story with clarity and admirable impartiality. . . . Read this book."
—Financial Times

"Montefiore’s towering biography of the city relates in fascinating, horrific and sometimes comical detail the wars to annexe its symbolic sanctity and the daily lives of its inhabitants. This monument of scholarly research is also a compelling story: of human foibles, lust, bravery and chicanery."
—The Times of London

"A memorable and distinguished history of a city where ‘the truth is much less important than the myth’. . . . Splendidly evoked."
—Richmond Times-Dispatch

"Magnificent. . . . A spectacular book for general readers. . . . This is a book about the ages, for the ages."
—Wichita Eagle

"Sweeping and absorbing. . . . Montefiore is a master of colorful and telling details and anecdotes. . . . His account is admirably dispassionate and balanced."
—Washington Post Book World

"In his stunningly comprehensive history, Simon Sebag Montefiore covers 3,000-plus years of the Earth’s most fiercely contested piece of geography. . . . Not only has Montefiore delivered a piece of superb scholarship, he has done so in an extremely easy-to-read style. The author tells the history of the complex relationships that existed between long-dead peoples in a manner that makes them seem human and understandable. . . . Meticulously researched."
—The Newark Star-Ledger

"Few historians have demonstrated the vision, mastery, and boldness necessary to publish on a subject so vast and in such detail as Montefiore. . . . A marvelous panorama."
—Library Journal

“This is an essential book for those who wish to understand a city that remains a nexus of world affairs. . . . Although his Jewish family has strong links to the city, Montefiore scrupulously sustains balance and objectivity. . . . Beautifully written, absorbing.”
—Booklist (starred)

“A panoramic narrative of Jerusalem, organized chronologically and delivered with magisterial flair. Spanning eras from King David to modern Israel with rich anecdotes and vivid detail, this exceptional volume portrays the personalities and worldviews of the dynasties and families that shaped the city throughout its 3,000-year history.”
—Publishers Weekly (starred)

“An essential text, bathed in blood, lit with faint hope. . . . The author sees Jerusalem not just as the setting for some of history’s most savage violence but a microcosm of our world. . . . The story is horribly complex, and Montefiore struggles mightily to make everything clear as well as compelling.”
—Kirkus Reviews (starred)

“Immensely readable. . . . Montefiore is that rarest of things: a historian who writes great, weighty tomes that read like the best thrillers. . . . [He] has a visceral understanding of what makes history worth reading. [Montefiore] manages to bring people who have been dead for two millennia alive again and make them breathe, and he has insight into the mind of psychopathic tyrants that makes you wish he were working for the U.S. secretary of state.”
—Newsweek