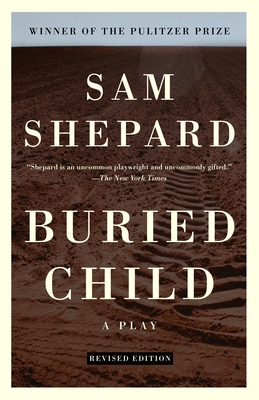 
May be on Backorder or may be Out of Print. May take a number of weeks to arrive if it arrives at all. We will confirm.
A newly revised edition of an American classic, Sam Shepard’s Pulitzer Prize—winning Buried Child is as fierce and unforgettable as it was when it was first produced in 1978.

A scene of madness greets Vince and his girlfriend as they arrive at the squalid farmhouse of Vince’s hard-drinking grandparents, who seem to have no idea who he is. Nor does his father, Tilden, a hulking former All-American footballer, or his uncle, who has lost one of his legs to a chain saw. Only the memory of an unwanted child, buried in an undisclosed location, can hope to deliver this family from its sin.
SAM SHEPARD was the Pulitzer Prize–winning author of more than fifty-five plays, three story collections, and two works of prose fiction. As an actor, he appeared in more than sixty films, and received an Oscar nomination in 1984 for The Right Stuff. He was a finalist for the W. H. Smith Literary Award for his story collection Great Dream of Heaven. In 2012 he was awarded an honorary doctorate from Trinity College, Dublin. He was a member of the American Academy of Arts and Letters, received the Gold Medal for Drama from the Academy, and was inducted into the Theater Hall of Fame. He died in 2017.

“Shepard is an uncommon playwright and uncommonly gifted.” –The New York Times