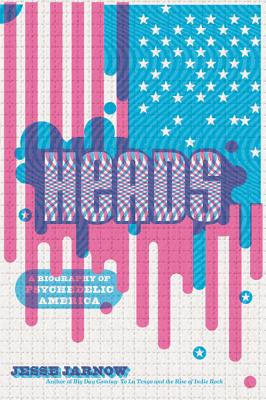 By Jesse Jarnow
Hard to Find

WFMU DJ and veteran music writer Jesse Jarnow draws on extensive new firsthand accounts from many never-before-interviewed subjects and a wealth of deep archival research to create a comic-book-colored and panoramic American landscape, taking readers for a guided tour of the hippie highway filled with lit-up explorers, peak trips, big busts, and scenic vistas, from Vermont to the Pacific Northwest, from the old world head capitals of San Francisco and New York to the geodesic dome-dotted valleys of Colorado and New Mexico. And with the psychedelic research moving into the mainstream for the first time in decades, Heads also recounts the story of the quiet entheogenic revolution that for years has been brewing resiliently in the Dead's Technicolor shadow.

Featuring over four dozen images, many never before seen-including pop artist Keith Haring's first publicly sold work-Heads weaves one of the 20th and 21st centuries' most misunderstood subcultures into the fabric of the nation's history. Written for anyone who wondered what happened to the heads after the Acid Tests, through the '70s, during the Drug War, and on to the psychedelic present, Heads collects the essential history of how LSD, Deadheads, tie-dye, and the occasional bad trip have become familiar features of the American experience.

Jesse Jarnow is the author of Big Day Coming: Yo La Tengo and the Rise of Indie Rock and Wasn't That a Time: The Weavers, the Blacklist, and the Battle for the Soul of America. His writing on music, technology, and culture has appeared in the New York Times, Pitchfork, Wired.com, Rolling Stone, Dupree's Diamond News, and elsewhere. He is a contributing editor at Relix, and hosts the weekly Frow Show on independent Jersey City radio station WFMU. He tweets via @bourgwick and @HeadsNews and lives in Brooklyn.

High Times, May 2016
“Occasionally a scribe appears who nails in prose the experience of getting high. Tom Wolfe and Hunter Thompson were two; Jesse Jarnow is another. The half-century history of freak-flag-flying pops off the page through Jarnow's fluid wordplay mastery.”

The New Yorker, 5/17/16
“Meticulously researched…Jarnow himself was too young to experience the sixties firsthand, but this distance lends his investigation a kind of innocent verve. He is vigilant in his attempt to understand the idealism of the past on its own terms, and to regard the ‘head'—the archetypal, open-minded sixties explorer—as someone whose skepticism toward power structures and authority might still resonate with us today.”

Bull Tongue Review, issue #5
“A surprisingly engaging book about acid and what its flow hath wrought.”

The Wire, May 2016
“Gives what is surely the most detailed history to date of the formation of early LSD culture…It also continues the story to the present day.”


Mojo, May 2016
“From the chemists who made it to the musicians who ate it, this history of American heads is a trip…Central to the story is the synergy between music and drugs. (Casualties are acknowledged.)…Both educational and big fun…Yes, dear reader, consuming Heads will get you high.”

Alt Daily, 3/15/16
“[A] well-researched and crisp volume…Heads is the endlessly fascinating story of how the distribution of one chemical changed American history…Heads fits comfortably on the same shelf as Mark Kurlansky's Salt: A World History or Diane Ackerman's A Natural History of the Senses. It is a book for anyone who has ever taken LSD or read a Philip K. Dick novel or felt a strange glow while listening to John Coltrane or gazed amazed at the glowing lights of a strange city.”

National Post, 4/2/16
“Connect[s] the dots between the hippie community in 1960s San Francisco and the oligarchy in 21st-century Silicon Valley.”

Aquarium Drunkard, 3/30/16
“While there's been no shortage of writing devoted to the Grateful Dead and its various subcultures, I don't think there's been one book that goes as deep as Jesse Jarnow's new, completely marvelous Heads. I'd say it's the best Dead tome ever written, but the Dead are only part of the overall picture…[A] compelling, decade-spanning tapestry…An essential piece of underground cultural history, but more than anything it reads like an epic adventure story…Make no mistake: Heads is the definition of a must-read.”

NPR.org's The Record, 4/5/16
“[A] deep exploration of American psychedelic culture.”

The Week, 4/29/16
“[An] engaging history of hallucinogens in America…[Jarnow] has built a proud history for psychedelia.”

Praise for Heads: A Biography of Psychedelic America

Will Hermes, author of Love Goes to Buildings on Fire: Five Years in New York That Changed Music Forever
“A lucid, illuminating, profound, and often hilarious history of how psychedelics have shaped this great nation—not just music (though the Dead loom large), but across the entire cultural-spiritual landscape. As all goes to hell in a bucket, there are lessons here about what gives our lives meaning, and the roads forward.”

Lee Ranaldo, Sonic Youth/Lee Ranaldo & The Dust
“Herein Jesse Jarnow charts previously unwrit histories of acid culture, outlining some of the various trade routes to our contemporary illumination. With Grateful Dead as vehicle for Trips Festival dissemination via ecstatic concert music and tour-nomadism, psychedelics opened the doors and minds that led to our time. This book offers a document of how Heads-culture spread across Humbead's Revised Map of the World. It is not advisable to drive or operate heavy machinery while reading this book.”

Blair Jackson, co-author of This Is All a Dream We Dreamed: An Oral History of the Grateful Dead and Garcia: An American Life
“What a trip! Heads is a fascinating, thought-provoking, and vastly entertaining psychedelic ramble that artfully traces the Day-glo lines zig-zagging through the acid culture that spawned the Grateful Dead, New York's gritty graffiti/street art scene, the rise of Phish and other jam bands, the rave explosion, and even the evolution of Burning Man. Jarnow's kaleidoscopic tale is populated by an amazing array of artists, musicians, pirates, schemers, drifters, dreamers, free-thinkers, libertines, rogues, and visionaries. It's a great story, wonderfully told.”

Kirkus Reviews, 3/1/16
“A history of the interplay between hallucinogens and rock music in the innocent minds of young America…Jarnow has a bloodhound's sense of the marrow of an argument and the meat of historic fact: no one else has so clearly pointed out the path that led from Garcia's old lady to the ‘delicious seedless pot' that turned smoking a joint into a gasket-blowing trip…[Jarnow's] book is a lot of fun to read…Latter-day heads—as well as 'relentless dabblers' and the historically minded—will enjoy this well-researched, mind-altering excursion.”

Geologist, Animal Collective
“This book reads like an actual acid trip. The web of stories and characters grows almost too fast to fully understand and appreciate, yet whenever the breadth of the threads starts to feel overwhelming, Heads centers you with the Grateful Dead as the connective tissue and you willingly go along for the ride.”

Michaelangelo Matos, author of The Underground Is Massive: How Electronic Dance Music Conquered America
“‘Computers are good news, maybe the best since psychedelics,' Stewart Brand wrote. Following the dealers and the Dead freaks united all the way to the frightening and thrilling future of the present, Jesse Jarnow puts on his Uncle Sam top hat and Fabulous Furry Freak Brother mustache and connects microdot after microdot, from the medical academy to Bronx graffiti taggers to Silicon Valley techies to all-night dancers. He writes like he's seen the universe a few times himself. He certainly builds one.”

Portland Book Review, 3/30/16
“Written in an obviously well researched, but ultimately stream of consciousness style…The end result is an accumulation of knowledge that fits together like a jigsaw without ever becoming overtly historical…Highly recommend for any reader who is interested in the history of America in the past fifty years. Although the subject seems narrow, readers will find that the movement, or at least the people, touched many places and many aspects of society that influence the lives of almost every American today, whether they know it or not.”

Amanda Petrusich, author of Do Not Sell at Any Price, on All Music Books 2/12/16
“Brilliant.”

Literary Hub, 2/25/16
“Jesse Jarnow's Heads explores the psychedelic culture that surfaced in the 1960s and was carried on by the Grateful Dead…Jarnow goes to great lengths to show just how important the band has been to culture beyond just a bunch of stoned hippies dancing in a circle. It's a fascinating book.”

Flavorwire (10 Must-Read Books for March 2016), 3/1/16
“A nonfiction study worthy of the paranoiac masters of the American novel…It's likewise an act of militant nostalgia that aims to rescue a subculture from the gloom of mainstream silliness.”

Library Journal, 3/10/16
"Thoughtful and compelling...The story of psychedelics and the Dead may never have been so interestingly told. A must for fans of the Dead and for anyone interested in the history of drugs or the counterculture."

PopMatters, 3/7/16
“An in-depth exploration of both the main players and fringe elements of the scene, giving equal share to the drugs and the music, art and culture they spawned…Jarnow's book helps bring into sharper focus the sprawling influence of Deadhead's who, knowingly or not, helped usher in the modern age.”


"If you are a fan of books dealing with the history of salt, timber or something more exotic like sex, you will delight in Heads, a book about psychedelics...[A] well-documented spiraling history of how these drugs transformed our present culture."—Bookcase TV, 10/26/16

"A brilliant study of the transformative impact of LSD on a half-century of U.S. art, music, movies, spirituality and technology."—Uncut, "Book of the Year," December 2016

"[Jarnow] is our generation's foremost Grateful Dead chronicler, and something of a cultural ambassador to the punks and indie kids who might not otherwise pay the band any mind."

"Music, history and psychopharmacology blend together in Heads...Jarnow describes in colorful and scrupulously researched detail how psychedelic music fused with actual psychedelics to create a ceaselessly regenerating 'hip economy' that persists to this day...It's a head trip and then some."
—Rolling Stone, "10 Best Music Books of 2016"