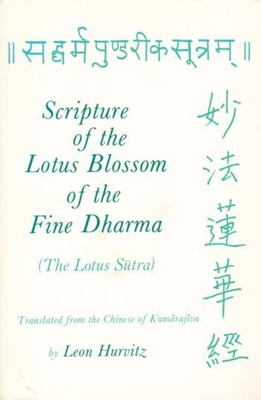 By Leon Hurvitz (Translator)
$49.40
Not in stock at store. Will, in most instances, ship from our warehouse in 7-10 days

Originally published in 1976, Leon Hurvitz's monumental translation of the Lotus Sutra is the work scholars have preferred for decades. Hailed by critics as an "extraordinary" and "magnificent" achievement, Hurvitz's translation is based on the best known Chinese version of the text and includes passages of the original Sanskrit that were omitted from the Chinese. Beloved for its mythology and literary artistry, the Lotus Sutra is one of the most popular and influential texts of Mahayana Buddhism, asserting that there is only one path to enlightenment, the bodhisattva path, and that all followers without exception can achieve supreme awakening. The text argues that the Buddha cannot be delimited by time and space and that a common intent underlies the diversity of Buddhist teachings. Through parables of the burning house, the wayward son, and other tales that have come to be known throughout East Asia, the sutra skillfully concretizes abstract religious concepts and clarifies bold claims about the Buddhist tradition. Urging devotees to revivify doctrine through recitation and interpretation, the sutra powered an organic process of remaking that not only kept its content alive in the poetry and art of premodern Asia but also introduced new forms of practice and scriptural study into contemporary Buddhism. Stephen F. Teiser's foreword addresses this vital quality of the sutra, discusses its background, and reflects on the enduring relevance of Hurvitz's critical work.

Leon Hurvitz (1923-1992) was professor in the Department of Asian Studies, University of British Columbia. He spent time as a translator and interpreter and later studied in Japan during the occupation, specializing in early Chinese Buddhism.Stephen F. Teiser is D. T. Suzuki Professor in Buddhist Studies at Princeton University. His research focuses on the interaction between Buddhism and Chinese forms of religion. His book Reinventing the Wheel: Paintings of Rebirth in Medieval Buddhist Temples received the Stanislas Julien Prize from the Institut de France.