Traditional Japanese Literature: An Anthology, Beginnings to 1600 (Translations from the Asian Classics) (Paperback) 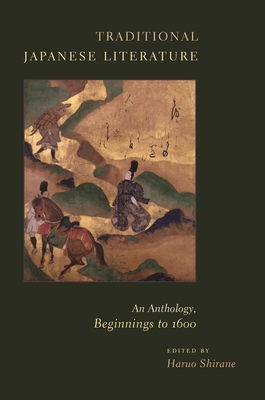 By Haruo Shirane (Editor)
$71.50
Not in stock at store. Will, in most instances, ship from our warehouse in 7-10 days

Traditional Japanese Literature features a rich array of works dating from the very beginnings of the Japanese written language through the evolution of Japan's noted aristocratic court and warrior cultures. It contains stunning new translations of such canonical texts as The Tales of the Heike as well as works and genres previously ignored by scholars and unknown to general readers. This volume includes generous selections from Man'yÿsh, The Tale of Genji, The Pillow Book, Kokinsh, and other classics of Japanese literature, as well as a stunning range of folk literature, epic tales of war, poetry, and no drama. The anthology offers an impressive representation of dramatic, poetic, and fictional works from both high and low culture, along with religious and secular anecdotes, literary criticism, and works written in Chinese by Japanese writers. The wealth of classical poetry, linked verse, and popular poetry is accompanied by extensive commentary. Traditional Japanese Literature is a companion volume to Columbia University Press's Early Modern Japanese Literature: An Anthology, 1600-1900 and part of its four-volume history of Japanese literature. Arranged by chronology and genre, the readings are insightfully introduced and placed into their political, cultural, and literary context, and the extensive bibliographies offer further study for scholars and readers. Including a wide range of classic and popular works in poetry, prose, and drama, this anthology presents a definitive overview of traditional Japanese literature and deepens our understanding of classical and medieval Japanese culture.

Haruo Shirane is Shincho Professor of Japanese Literature in the Department of East Asian Languages and Cultures at Columbia University. He is the author and editor of numerous books on Japanese literature, including Envisioning the Tale of Genji: Media, Gender, and Cultural Production; Early Modern Japanese Literature: An Anthology, 1600-1900; and Classical Japanese: A Grammar.