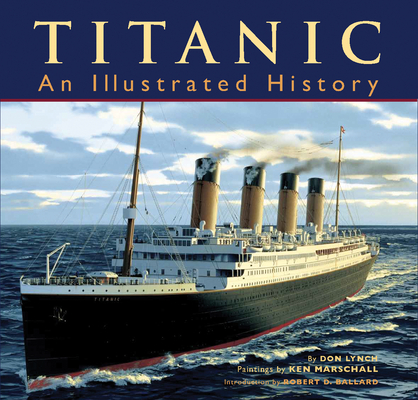 A huge ocean liner, its lights blazing, its band playing, is slowly sinking in a calm sea. To most people, this image evokes one name alone -- the Titanic.

119 years after this great maritime disaster, the haunting saga of the Titanic continues to fascinate the world. Now, republished in one splendidly illustrated volume, the complete story of the giant luxury liner that sank on its maiden voyage in April, 1912 is recreated.

Through dozens of full color, accurate paintings and illustrations by Titanic artist Ken Marschall, readers can again experience what it was like to sail on history's most famous ship. From the sight of water crashing through the glass-domed roof of the first-class staircase to a view of an underwater robot exploring the remains of the staircase seven decades later, each of the original Marschall paintings displayed here has a breathtaking impact.

Historian Don Lynch, the foremost expert on the people aboard the Titanic has compiled a text filled with enthralling information about the crew, the passengers and the ship itself. Encyclopedic in scope, this volume is an invaluable sourcebook of Titanic lore.

The pages of Titanic: An Illustrated History also display hundreds of archival photographs, paintings and illustrations, many published here for the first time. Authors Lynch and Marschall have also located and photographed fittings and fixtures from the Titantic's nearly identical sister ship, the Olympic, and can thus reveal the Edwardian splendor of the ship's interior in colorful visual spreads.

The book's showpiece is its 3-page foldout which reveals an original cutaway diagram of the Titanic. In this remarkable full-color illustration created by Ken Marschall expressly for this book, the Titanic's hull is opened up to reveal the layout of her public rooms and staterooms in accurate detail.

Don Lynch is a historian for the Titanic Historical Society. Ken Marschall is the leading painter of the Titanic. His work has been featured on the cover of Time and in National Geographic. Dr. Robert Ballard led the team that discovered the wreck of the Titanic in 1985.