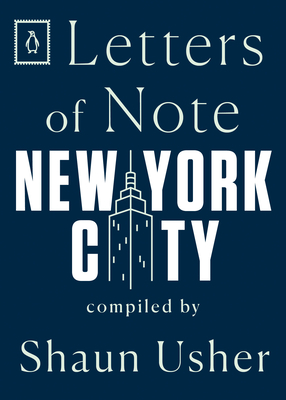 This is book number 10 in the Letters of Note series.

An exciting new volume of letters about the Capital of the World--from George Washington, Kahlil Gibran, Audrey Hepburn, Martin Scorsese, and more--from the author of the bestselling Letters of Note collections

Peter Schagen writes to the Dutch West India Company about the purchase of "Manhattes." Mayor Ambrose Kingsland urges the city council to create what became Central Park. E. B. White bemoans taxi cab design to Harold Ross, cofounder of The New Yorker. Bianca Jagger sets the record straight about that white horse in Studio 54. New York City goes by many names--Gotham, Empire City, the City That Never Sleeps--and once served as the capital of America. It came together as we know it in 1898 and has become one of the world's most powerful, most important megacities, shaping art, culture, finance, and media across the globe. This iconic collection of thirty letters smartly explores the history of life in the five boroughs. You'll need more than a New York minute to enjoy it all.
SHAUN USHER is the creator of the enormously popular blogs lettersofnote.com and listsofnote.com and the compiler of the bestselling Letters of Note collections. He spends much of his time hunting for letters and making lists of things to share. He lives in Manchester, England, with his family.