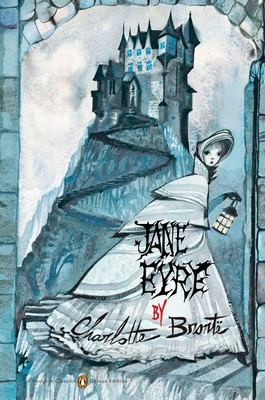 
On our shelves now (while supplies last)
An iconic novel dressed in a fierce design by acclaimed fashion illustrator Ruben Toledo. This couture-inspired collection also features The Picture of Dorian Gray, Dracula, The Scarlet Letter, Wuthering Heights and Pride and Prejudice.

Orphaned Jane Eyre endures an unhappy childhood, hated by her aunt and cousins and then sent to comfortless Lowood School. But life there improves and Jane stays on as a teacher, though she still longs for love and friendship. At Mr Rochester's house, where she goes to work as a governess, she hopes she might have found them - until she learns the terrible secret of the attic.

For more than seventy years, Penguin has been the leading publisher of classic literature in the English-speaking world. With more than 1,700 titles, Penguin Classics represents a global bookshelf of the best works throughout history and across genres and disciplines. Readers trust the series to provide authoritative texts enhanced by introductions and notes by distinguished scholars and contemporary authors, as well as up-to-date translations by award-winning translators.
Charlotte Bronte (1816-55), sister of Anne Bronte and Emily Bronte. Jane Eyre appeared in 1847 and was followed by Shirley (1848) and Vilette (1853). In 1854 Charlotte Bronte married her father's curate, Arthur Bell Nicholls. She died during her pregnancy on March 31, 1855 in Haworth, Yorkshire.

"At the end we are steeped through and through with the genius, the vehemence, the indignation of Charlotte Brontë."
--Virginia Woolf