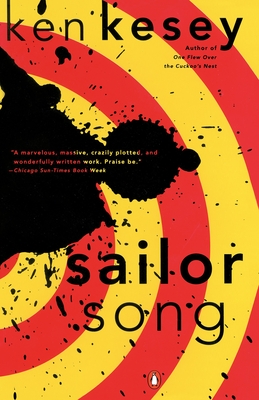 
Not in stock at store. Will, in most instances, ship from our warehouse in 7-10 days
This epic tale of the north is a vibrant moral fable for our time. Set in the near future in the fishing village of Kuinak, Alaska, a remnant outpost of the American frontier not yet completely overcome by environmental havoc and mad-dog development, Sailor Song is a wild, rollicking novel, a dark and cosmic romp. The town and its denizens—colorful refugees from the Lower Forty-Eight and DEAPs (Descendants of Early Aboriginal Peoples)—are seduced and besieged by a Hollywood crew, come to film the classic children's book The Sea Lion. The ensuing turf war escalates into a struggle for the soul of the town as the novel spins and swirls toward a harrowing climax. Writing with a spectacular range of language and style, Kesey has given us a unique and powerful novel about America.
Ken Kesey was born in 1935 and grew up in Oregon. He graduated from the University of Oregon and later studied at Stanford with Wallace Stegner, Malcolm Cowley, Richard Scowcroft, and Frank O' Connor. One Flew Over the Cuckoo's Nest, his first novel, was published in 1962. His second novel, Sometimes a Great Notion, followed in 1964. His other books include Kesey's Garage Sale, Demon Box, Caverns (with O. U. Levon), The Further Inquiry, Sailor Song, and Last Go Round (with Ken Babbs). His two children's books are Little Tricker the Squirrel Meets Big Double the Bear and The Sea Lion. Ken Kesey died on November 10, 2001.