First Principles: What America's Founders Learned from the Greeks and Romans and How That Shaped Our Country (Paperback) 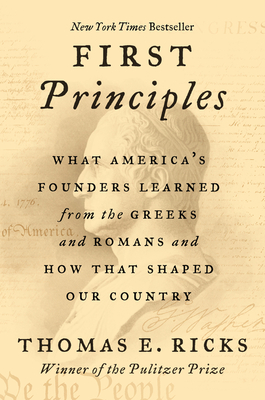 First Principles: What America's Founders Learned from the Greeks and Romans and How That Shaped Our Country (Paperback)

"Ricks knocks it out of the park with this jewel of a book. On every page I learned something new. Read it every night if you want to restore your faith in our country." — James Mattis, General, U.S. Marines (ret.) & 26th Secretary of Defense

Now in paperback, Pulitzer Prize-winning journalist and #1 New York Times bestselling author Thomas E. Ricks offers a revelatory new book about the founding fathers, examining their educations and, in particular, their devotion to the ancient Greek and Roman classics—and how that influence would shape their ideals and the new American nation.

On the morning after the 2016 presidential election, Thomas Ricks awoke with a few questions on his mind: What kind of nation did we now have? Is it what was designed or intended by the nation’s founders? Trying to get as close to the source as he could, Ricks decided to go back and read the philosophy and literature that shaped the founders’ thinking, and the letters they wrote to each other debating these crucial works—among them the Iliad, Plutarch’s Lives, and the works of Xenophon, Epicurus, Aristotle, Cato, and Cicero. For though much attention has been paid the influence of English political philosophers, like John Locke, closer to their own era, the founders were far more immersed in the literature of the ancient world.

The first four American presidents came to their classical knowledge differently. Washington absorbed it mainly from the elite culture of his day; Adams from the laws and rhetoric of Rome; Jefferson immersed himself in classical philosophy, especially Epicureanism; and Madison, both a groundbreaking researcher and a deft politician, spent years studying the ancient world like a political scientist. Each of their experiences, and distinctive learning, played an essential role in the formation of the United States. In examining how and what they studied, looking at them in the unusual light of the classical world, Ricks is able to draw arresting and fresh portraits of men we thought we knew.

First Principles follows these four members of the Revolutionary generation from their youths to their adult lives, as they grappled with questions of independence, and forming and keeping a new nation. In doing so, Ricks interprets not only the effect of the ancient world on each man, and how that shaped our constitution and government, but offers startling new insights into these legendary leaders.

Thomas E. Ricks covered the U.S. military for the Washington Post from 2000 through 2008 and was on the staff of the Wall Street Journal for seventeen years before that. He reported on American military operations in Somalia, Haiti, Korea, Bosnia, Kosovo, Macedonia, Kuwait, Turkey, Afghanistan and Iraq. A member of two Pulitzer Prize-winning teams, he is also the author of several books, including The Generals, The Gamble, Churchill & Orwell, and the number-one New York Times bestseller Fiasco, which was a finalist for the Pulitzer Prize. He wrote First Principles while a visiting fellow in history at Bowdoin College.

"Ricks knocks it out of the park with this jewel of a book. On every page I learned something new. Read it every night if you want to restore your faith in our country." — James Mattis, General, U.S. Marines (ret.) & 26th Secretary of Defense

“One of my favorite works of history in a very long time. I grew up revering Jefferson. I found him loathsome here, but still recognize that like Churchill in 1940, a flawed man can move future events dramatically. Madison’s reach was remarkable. Poor Adams remained as miserable as I had always viewed him. But Washington was my revelation here. I have never been able to put flesh on those bones, but Ricks has done it.” — Joe Scarborough

“[An] extraordinarily timely book…If classical culture helped the new nation coalesce, what serves the same function today? Money? Pop culture? Political activism? And what about virtue? Does it still have a place in our society, and if so how might one define it? Interestingly, Mr. Ricks points out that for the Revolutionary generation, ‘silent virtue almost always would be valued more than loud eloquence.’ Of course the opposite is true now.” — Wall Street Journal

“A rich compendium of the ancient wisdom that Washington, Adams, Jefferson and Madison believed they were gleaning from Aristotle or Tacitus, and the formation of 'classically shaped behavior' in the early republic…Antiquity mattered, Ricks suggests, because it formed the intellectual foundation for the revolutionary generation. Knowing the source of the values they claimed to espouse and the historical comparisons they took as obvious, we can know more about the founders themselves — and perhaps something of how the country we now have measures up to the one they envisioned.” — Washington Post

“Ricks masterfully documents how examples of city states like Athens and the Roman Republic informed the four aforementioned Founding Fathers and their fellow travelers… So the question lurking in the shadows throughout this engaging political peregrination is the one the author asks in the epilogue: ‘Did the founders anticipate Donald Trump?’… Ricks points out that even iconic political figures oftentimes behaved in disturbing ways, just like politicians do today....It seems the document was eminently more perfect than the men who created it.” — USA Today

“In this instructive new book, [Ricks] offers a judicious account of the equivocal inheritance left to modern Americans by their 18th-century forebears…[He] urges Americans to fix their government so that it protects citizens from the inevitable lapses of a fallible people and, perhaps, even more fallible leaders.” — New York Times Book Review

"First Principles is a fascinating and erudite look at how Greek and Roman writers influenced members of the Founding Generation. From the Harvard-educated John Adams to the largely self-taught George Washington, the most well-known of American Revolutionaries, turned statesmen, looked to the classical world to answer critical questions about the nature of power and the nature of government." — Annette Gordon-Reed, the Charles Warren Professor of American Legal History at Harvard Law School, and Pulitzer Prize-winning author of The Hemingses of Monticello

"Ricks knows his subject well,  and, equally important, he writes about it lucidly." — Gordon Wood, University Professor at Brown University, and author of The Radicalism of the American Revolution and Empire of Liberty: A History of the Early Republic

"Thomas Ricks’s deeply personal, patriotic quest to recover and renew the principles that animated America’s founders testifies eloquently to the value of historical understanding in these troubled times. Steeped in the classics, the founders could not have imagined our world and we are now, more than ever, acutely conscious of their failure to engage with the fundamental problem of racial slavery and its enduring legacies. But Ricks offers us a timely reminder of what the first four, nation-making presidents could imagine and did struggle to achieve."
— Peter S. Onuf, Thomas Jefferson Professor of History, Emeritus, University of Virginia, coauthor of Most Blessed of the Patriarchs: Thomas Jefferson and the Empire of the Imagination

"An immersive and enlightening look at how the classical educations of the first four U.S. presidents (George Washington, John Adams, Thomas Jefferson, and James Madison) influenced their thinking and the shape of American democracy....With incisive selections from primary sources and astute cultural and political analysis, this lucid and entertaining account is a valuable take on American history." — Publishers Weekly (starred review)

"Ricks does something quite remarkable: he takes a seemingly academic topic—the Greco-Roman education of the Founding Fathers—and makes it resonate with grand relevance....Offering a look at the Founders rarely glimpsed, Ricks successfully argues that America needs to rediscover its classical roots." — Library Journal (starred review)

“In First Principles, Ricks provides us the reading list we would have to undertake to get close to the Framers’ worldview. Ricks is not squeamish about their collective blindness to the evil of slavery, or its cruelty and brutality….What the flawed Framers gifted us was a blueprint of genius that we have since improved upon greatly because of Lincoln, the suffragists, the Rev. Martin Luther King Jr. and the many other civil rights leaders of that era….Ricks reminds us of our purpose.” — Hugh Hewitt, Washington Post

"The Pulitzer Prize-winning author offers a new interpretation of the individuals who shaped our constitution and government. You’ll find new insights into the past from the first page to the last." — Detroit Free Press

"In First Principles, a lively and accessible synthesis of the work of generations of historians and his own reading of the letters, speeches, and pamphlets of Washington, Adams, Jefferson, and Madison, Ricks assesses the influence of classical public philosophy and practice on politics in America in the late eighteenth and early nineteenth centuries — and draws conclusions about the country we have become."
— Psychology Today

“An exploration of the major influences of America’s first four presidents…[In 2016 Ricks asked,] ‘What kind of nation do we now have? Is this what was designed or intended by the nation’s founders?’…[He] reassures readers that the durable Constitutional order can handle a Donald Trump, and he concludes with 10 strategies for putting the nation back on course…Penetrating history with a modest dollop of optimism."  — Kirkus Reviews

“First Principles stands alone as an important work on the Revolutionary period.” — Journal of the American Revolution