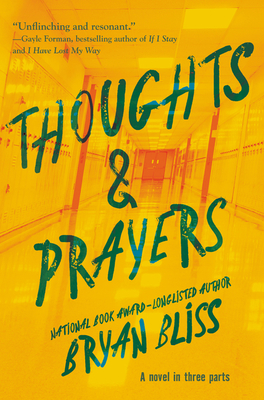 "In his unflinching and resonant new novel, Bryan Bliss shows that there is no straight line through trauma, no easy recipe for healing. Instead, in three loosely connected stories of young people bound by an all-too familiar tragedy, he deftly illuminates the small  moments of human connection and resolve that might just lead to a place of grace."—Gayle Forman, bestselling author of If I Stay and I Have Lost My Way

Fight. Flight. Freeze. What do you do when you can’t move on, even though the rest of the world seems to have?

For readers of Jason Reynolds, Marieke Nijkamp, and Laurie Halse Anderson. Powerful and tense, Thoughts & Prayers is an extraordinary novel that explores what it means to heal and to feel safe in a world that constantly chooses violence.

Claire, Eleanor, and Brezzen have little in common. Claire fled to Minnesota with her older brother, Eleanor is the face of a social movement, and Brezzen retreated into the fantasy world of Wizards & Warriors.

But a year ago, they were linked. They all hid under the same staircase and heard the shots that took the lives of some of their classmates and a teacher. Now, each one copes with the trauma as best as they can, even as the world around them keeps moving.

Told in three loosely connected but inextricably intertwined stories, National Book Award–longlisted author Bryan Bliss’s Thoughts & Prayers follows three high school students in the aftermath of a school shooting. Thoughts & Prayers is a story about gun violence, but more importantly it is the story of what happens after the reporters leave and the news cycle moves on to the next tragedy. It is the story of three unforgettable teens who feel forgotten.

Bryan Bliss is the author of the National Book Award longlist title We’ll Fly Away, as well as Thoughts & Prayers, Meet Me Here, and No Parking at the End Times. He holds master’s degrees in theology and fiction and has worked as a curriculum designer and developer and as a youth pastor. His nonfiction has been published in Image Journal, along with various other newspapers, magazines, and blogs. He lives with his family in St. Paul, Minnesota.

“[A] richly realized novel . . . Divided into three parts . . . each part is nearly long enough to have been published as a standalone novel . . . The theme, of course, is a powerful one, and it is passionately and successfully presented in this inarguably important book, which offers no glib answers but invites serious thought and discussion.”
— Booklist (starred review)

"In his unflinching and resonant new novel, Bryan Bliss shows that there is no straight line through trauma, no easy recipe for healing. Instead, in three loosely connected stories of young people bound by an all-too familiar tragedy, he deftly illuminates the small  moments of human connection and resolve that might just lead to a place of grace."
— Gayle Forman, bestselling author of If I Stay and I Have Lost My Way

“About one year ago, three students cowered together under a staircase during a mass shooting in their school. Now, each one is attempting to move on with life in their own way. . . . The characters are real and likable, and their trauma is honest and raw. Bliss raises unanswerable questions that will allow teenage readers room to reflect and debate. . . . An affecting story of trauma and healing.”
— Kirkus Reviews

“A year after a school shooting, three teens share their stories. . . . Though showing signs of light, the characters' recovery is far from over by the book’s end, which rings authentically untidy. . . . Each story is a separate meditation on the ways a horrific event can turn a life upside down.”
— School Library Journal

“[An] affecting narrative triptych. . . . In each memorable narrative thread, characters are distinct and carefully drawn . . . The three stories do yield 'an honest picture of healing after trauma,' as the author hopes.”
— Horn Book Magazine