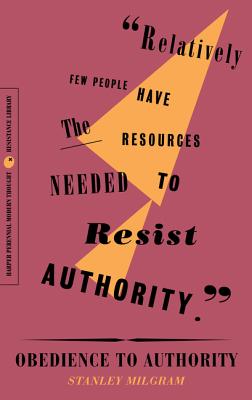 By Stanley Milgram
$10.99
On our shelves now (while supplies last)

In the 1960s, Yale University psychologist Stanley Milgram famously carried out a series of experiments that forever changed our perceptions of morality and free will. The subjects—or “teachers”—were instructed to administer electroshocks to a human “learner,” with the shocks becoming progressively more powerful and painful. Controversial but now strongly vindicated by the scientific community, these experiments attempted to determine to what extent people will obey orders from authority figures regardless of consequences. “Milgram’s experiments on obedience have made us more aware of the dangers of uncritically accepting authority,” wrote Peter Singer in the New York Times Book Review. Obedience to Authority is Milgram’s fascinating and troubling chronicle of his classic study and a vivid and persuasive explanation of his conclusions.

In times of crisis, the great works of philosophy help us make sense of the world. The Harper Perennial Resistance Library is a special five-book series highlighting short classic works of independent thought that illuminate the nature of truth, humanity's dangerous attraction to authoritarianism, the influence of media and mass communication, and the philosophy of resistance—all critical in understanding today's politically charged world.

Stanley Milgram taught social psychology at Yale University and Harvard University before becoming a Distinguished Professor at the Graduate Center of the City University of New York. His honors and awards include a Ford Foundation fellowship, an -American Association for the Advancement of Science sociopsychological prize, and a Guggenheim fellowship. He died in 1984 at the age of fifty-one.

“Milgram’s experiments on obedience have made us more aware of the dangers of uncritically accepting authority.”
— Peter Singer, New York Times Book Review

“Stanley Milgram’s experiments on obedience to malevolent authority seemed to me to be the most important social psychological research done in this generation….The quality of exposition in the book I s so high that it qualifies as literature as well as science.”
— Roger Brown, Harvard University

“This well-designed and brilliantly executed research study, reported in an unusually fascinating and very readable style, reveals the elusive and sometimes shocking conditions under which men obey authority regardless of the morality involved.”
— Library Journal

“A major contribution to our knowledge of man’s behavior. It establishes firmly in the front rank of social scientists in this generation.”
— Jerome S. Brunner, Oxford University

“One of the most significant books I have read in more than two decades of reviewing.”
— Robert Kirsch, Los Angeles Times

“Milgrim’s experiment-based analysis is a model of systematic, sequential, patient pursuit of answers to a significant social problem. His investigations accomplish what we should expect of responsible social science: to inform the intellect without trivializing the phenomenon.”
— Henry W. Reicken, Science