Buried Beneath the Baobab Tree (Paperback) 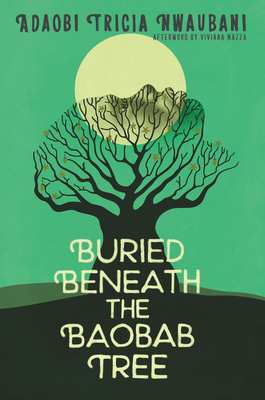 Buried Beneath the Baobab Tree (Paperback)

Based on interviews with young women who were kidnapped by Boko Haram, this poignant novel by Adaobi Tricia Nwaubani tells the timely story of one girl who was taken from her home in Nigeria and her harrowing fight for survival. Includes an afterword by award-winning journalist Viviana Mazza.

A new pair of shoes, a university degree, a husband—these are the things that a girl dreams of in a Nigerian village. And with a government scholarship right around the corner, everyone can see that these dreams aren’t too far out of reach.

But the girl’s dreams turn to nightmares when her village is attacked by Boko Haram, a terrorist group, in the middle of the night. Kidnapped, she is taken with other girls and women into the forest where she is forced to follow her captors’ radical beliefs and watch as her best friend slowly accepts everything she’s been told.

Still, the girl defends her existence. As impossible as escape may seem, her life—her future—is hers to fight for.

Adaobi Tricia Nwaubani is a Nigerian writer and journalist. The author of the award-winning novel I Do Not Come to You by Chance, Adaobi has had her writing featured in the New York Times, the Guardian, and the New Yorker. You can find her at www.adaobitricia.com.

Viviana Mazza is an Italian journalist who won the 2010 Marco Luchetta Journalist Prize, dedicated to raising awareness of the plight of children affected by war. She has also written The Story of Malala and The Baby Nelson Mandela, which were published in Italy.

“This powerful novel … seeks to personalize the 2014 kidnapping of 276 girls from a secondary school in Chibok… Nwaubani, a Nigerian novelist, teamed up with the Italian journalist Viviana Mazza to interview the families of kidnapped girls as the basis for this heartbreaking, necessary account.” — New York Times Book Review

“Poignant and powerful, this is a story that will be hard for any reader to forget.” — ALA Booklist (starred review)

“Unflinching in its direct view of an ongoing tragedy, this important novel will open discussions about human rights and violence against women and girls worldwide.” — Publishers Weekly (starred review)

“Nigerian author Nwaubani [paints] beautiful portraits of the joy, hope, and traditions experienced by this girl, her friends, and family with the same masterful strokes as the ones depicting the dreadful agony, loss, and grief they endure. A worthy piece of work that superbly and empathetically tells a heartbreaking tale.” — Kirkus Reviews (starred review)

“Nwaubani weaves moments of hope and connection between the girls through this heart-wrenching tale. This painful, powerful story draws from interviews with female survivors of Boko Haram’s abuse and their families. It reminds readers — and the world — of the girls and women as yet unfound.” — Washington Post

“Nwaubani has crafted an emotional yet empowering tale based on the true story of 276 Nigerian girls kidnapped by Boko Haram in 2014.” — School Library Journal

“Brief, individually titled chapters augment the tension and accelerate the plot... An afterword provides critical context on Boko Haram and the 2014 attack on Chibok.” — Bulletin of the Center for Children’s Books