A Thousand Beginnings and Endings (Hardcover) 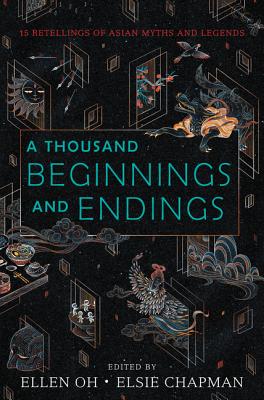 A Thousand Beginnings and Endings (Hardcover)

Star-crossed lovers, meddling immortals, feigned identities, battles of wits, and dire warnings: these are the stuff of fairy tale, myth, and folklore that have drawn us in for centuries.

Sixteen bestselling and acclaimed authors reimagine the folklore and mythology of East and South Asia in short stories that are by turns enchanting, heartbreaking, romantic, and passionate.

A mountain loses her heart. Two sisters transform into birds to escape captivity. A young man learns the true meaning of sacrifice. A young woman takes up her mother’s mantle and leads the dead to their final resting place.

From fantasy to science fiction to contemporary, from romance to tales of revenge, these stories will beguile readers from start to finish. For fans of Neil Gaiman’s Unnatural Creatures and Ameriie’s New York Times–bestselling Because You Love to Hate Me.

is the cofounder of We Need Diverse Books and author of the award-winning Spirit Hunters series for middle grade readers and the Prophecy trilogy (Prophecy, Warrior, and King) for young adults. Originally from New York City, Ellen is a former adjunct college instructor and lawyer with an insatiable curiosity for ancient Asian history. Ellen lives in Bethesda, Maryland, with her husband and three children and has yet to satisfy her quest for a decent bagel. You can visit her online at www.ellenoh.com.

Sona Charaipotra is the author of Symptoms of a Heartbreak and How Maya Got Fierce, and co-author of The Rumor Game and Tiny Pretty Things, now a Netflix original series. She earned a master’s degree in screenwriting from NYU and an MFA in creative writing from the New School. A working journalist, Sona has held editorial roles at People, TeenPeople, ABCNews.com, MSN, several parenting publications, the Barnes & Noble Teen Blog (RIP), and, most recently, as senior editor of trends and features at Parents.com. She has contributed to publications from the New York Times to TeenVogue. She is a former We Need Diverse Books board member, and she cofounded CAKE Literary, a boutique book packager focused on high concept diverse titles. Find her on the web talking about books, Bollywood movies, and chai.

ROSHANI CHOKSHI is the award-winning author of the New York Times bestselling series the Star-Touched Queen and the Gilded Wolves, as well as of Aru Shah and the End of Time, which Time magazine named one of the 100 Best Fantasy Books of All Time. Her novels have been translated into more than two dozen languages and often draw upon world mythology and folklore. Chokshi is a member of the National Leadership Board for the Michael C. Carlos Museum and lives in Georgia with her husband and their cat.

Melissa de la Cruz grew up in Manila and San Francisco. She is the author of the novels Cat's Meow (Scribner, 2001) and The Au Pairs (Simon & Schuster, 2004). She coauthored the nonfiction books How to Become Famous in Two Weeks or Less (Ballantine, 2003) and The Fashionista Files: Adventures in Four-Inch Heels and Faux Pas (Ballantine, 2004). Her work has been translated into many languages. She lives in Los Angeles with her husband.

Naomi Kanakia's novels include We Are Totally Normal and Enter Title Here. Additionally, her stories have appeared in Asimov’s Science Fiction, Clarkesworld, Fantasy & Science Fiction, Lightspeed, Indiana Review, and Nature. She has received fellowships from the Virginia Center for the Creative Arts and the Lambda Literary Foundation. Originally from Washington, DC, Naomi now lives in San Francisco.

Cindy Pon is the author of Silver Phoenix, named one of the top ten fantasy novels for youth by Booklist. She lives with her husband and two children in San Diego, California.

Aisha Saeed is the New York Times bestselling author of the critically acclaimed novel Amal Unbound; the Bank Street Books Best Book Written in the Stars; Aladdin: Far from Agrabah; and Bilal Cooks Daal. Aisha is also a founding member of the nonprofit We Need Diverse Books. She lives in Atlanta with her husband and sons. You can find her online at www.aishasaeed.com.

Shveta Thakrar’s debut novel, Star Daughter, is a standalone YA fantasy perfect for fans of Neil Gaiman, Laini Taylor, and Margaret Rogerson. Shveta's work has appeared in a number of magazines and anthologies, including Enchanted Living, Uncanny Magazine, and Toil & Trouble. You can find her online at www.shvetathakrar.com and on Twitter and Instagram at @ShvetaThakrar.

“Contrary to our Disney-fied expectations, not every story has a happy ending — yet another facet to this fine compilation that enhances its ability to surprise, intrigue and delight.” — Chicago Tribune

“This collection fills a gap in modern retellings of fairy tales and myths by presenting non-European myths. ...Give to fans of Marissa Meyer’s “Lunar Chronicles” or Rick Riordan’s Magnus Chase and the Gods of Asgard. An excellent first purchase for all libraries.” — School Library Journal (starred review)

“Outstanding...Each story is followed by a missive from its author, sharing inspiration and background on creative choices and changes. Thoughtfully compiled and written, this compendium is a must-read.” — Publishers Weekly (starred review)

“A collection of Asian myths and legends in which beloved stories of spirits, magic, family, love, and heartbreak are combined with elements from modern teens’ lives….With such a variety of emotion and experiences to explore, nearly any teen can find something to relate to...An incredible anthology that will keep readers on the edges of their seats, wanting more.”  — Kirkus Reviews (starred review)

“Authors Oh and Chapman have created this much-needed anthology of Asian myths and folktales. ...It’s a wonderful concept, and the styles and subjects are as diverse as the countries and cultures represented. ...these stories are for everyone.” — Booklist

“Oh and Chapman bring together fifteen authors with Asian roots to reinterpret stories from throughout Asia, creating a collection that...explores the traditional folktale motifs of fate, vengeance, goodness, and love. ...an inventiveness on par with Bardugo’s folktale revisions in The Language of Thorns.” — Bulletin of the Center for Children’s Books

“All of these stories achieve emotional depth and connection while showcasing each storyteller’s unique literary voice.” — The Horn Book

“Fifteen acclaimed Asian and Asian-American authors breathe fresh life into 15 popular Asian folktales and myths, elevating this anthology to a higher level...Oh and Chapman have created a work that celebrates Asian storytelling. It should fill...the reader with wonder.” — BookPage