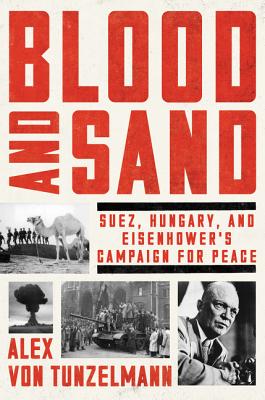 A lively, revelatory popular history that tells the story of both the Suez Crisis and the Hungarian Revolution of 1956—a tale of conspiracy and revolutions, spies and terrorists, kidnappings and assassination plots, the fall of the British Empire and the rise of American hegemony under the heroic leadership of President Dwight D. Eisenhower—which shaped the Middle East and Europe we know today.

The year 1956 was a turning point in history. Over sixteen extraordinary days in October and November of that year, the twin crises involving Suez and Hungary pushed the world to the brink of a nuclear conflict and what many at the time were calling World War III. Blood and Sand delivers this story in an hour-by-hour account through a fascinating international cast of characters: Anthony Eden, the British prime minister, caught in a trap of his own making; Gamal Abdel Nasser, the bold young populist leader of Egypt; David Ben-Gurion, the aging Zionist hero of Israel; Guy Mollet, the bellicose French prime minister; and Dwight D. Eisenhower, the American president, torn between an old world order and a new one in the very same week that his own fate as president was to be decided by the American people.

This is a revelatory history of these dramatic events and people, for the first time setting both crises in the context of the global Cold War, the Arab-Israeli conflict, and the treacherous power politics of imperialism and oil. Blood and Sand resonates strikingly with the problems of oil control, religious fundamentalism, and international unity that face the world today, and is essential reading for anyone concerned with the state of the modern Middle East and Europe.

Alex von Tunzelmann is the author of Blood and Sand, Indian Summer, and Red Heat. She lives in London.

“Gripping....Von Tunzelmann, an Oxford educated historian with an eye for human detail as well as a sure-handed grasp of the larger picture, does a marvelous job of recreating the tension and bungling that swept up up Cairo, London, Moscow, Budapest, Paris and Washington during the harrowing two weeks of Oct. 22 to Nov. 26, 1956.... Not only exciting and satisfying but also timely.” — Evan Thomas, New York Times Book Review

“Anchored with fresh documentary evidence, Blood and Sand is a riveting re-evaluation of the Cold War crises of 1956: Suez and Hungary. Alex von Tunzelmann has written a definitive history of these crucial events — a real page-turner and monument to first-rate scholarship.” — Douglas Brinkley, Professor of History at Rice University and author of Rightful Heritage: Franklin D. Roosevelt and the Land of America

“This thrilling ticktock brings the emotional core of geopolitical maneuvering into dramatic focus, with portraits of leaders variously honorable, pigheaded, irresolute, pusillanimous, and susceptible to mood swings.” — The New Yorker

“This book offers a shrewd, exciting history of the Suez crisis of 1956, and makes a clear case for its relevance today.” — New York Times

“The effect is a cinematic, you-are-there style of history-writing, which plunges the reader into the chaos of events.” — Adam Kirsch, Tablet

“A thoroughly well-researched, action-packed, and highly readable account of the two major international crises that shook the world in 1956, Blood and Sand is a fascinating tale of plots and conspiracies, of deception and double-dealing, of bullying and blundering.” — Avi Shlaim, author of The Iron Wall: Israel and the Arab World

“Von Tunzelmann deftly describes and links these twin struggles and offers excellent profiles of the key players, including Nasser and Eisenhower, shown here as the true ‘hero’ for his wisdom and restraint. This is an outstanding reexamination of these sad, history-altering events.” — Booklist, starred review

“Gripping.... A timely and insightful must-read for anyone who cares about Middle Eastern history or 20th-century diplomacy.” — Library Journal

“Skillfully and artfully integrates the complex, simultaneous Suez and Hungarian crises of 1956 into a single story of Cold War conflict as no one has before.” — Publishers Weekly

“Von Tunzelmann’s narrative cracks along like an international political thriller as she tracks the action day by day, sometimes hour by hour. A fine new account of an unnecessary crisis.” — Kirkus