Fire in the Hole: Stories (Paperback) 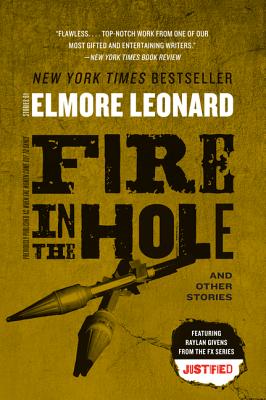 “[Leonard’s] most satisfying book since Out of Sight….Top-notch work from one of our most gifted and consistently entertaining writers.”
—New York Times Book Review

“Vintage Leonard….Nine stories with booze and shotguns and lowlifes…and lots of scenes that ought to be in movies.”
—Detroit Free Press

Originally published as When the Women Came Out to Dance, Elmore Leonard’s extraordinary story collection, Fire in the Hole reconfirms his standing as the “King Daddy of crime writers” (Seattle Times)—a true Grand Master in the legendary company of John D. MacDonald, Dashiell Hammett, and James M. Cain. These nine riveting tales of crime and (sometimes) punishment—including the title story starring U.S. Marshal Raylan Givens, which was the basis for the smash hit TV series Justified—feature all the elements that have made the great Elmore Leonard great: superb writing, unforgettable characters, breathtaking twists, and the sharpest, coolest dialogue in the mystery-thriller genre.

Elmore Leonard wrote more than forty books during his long career, including the bestsellers Raylan, Tishomingo Blues, Be Cool, Get Shorty, and Rum Punch, as well as the acclaimed collection When the Women Come Out to Dance, which was a New York Times Notable Book. Many of his books have been made into movies, including Get Shorty and Out of Sight. The short story "Fire in the Hole," and three books, including Raylan, were the basis for the FX hit show Justified. Leonard received the Lifetime Achievement Award from PEN USA and the Grand Master Award from the Mystery Writers of America. He died in 2013.

“If Leonard were a new kid instead of a past master, this fiction collection would make his name.”
— People

“Rummaging through Leonard’s attic via these nine stories revives some fond memories and turns up a couple of forgotten treasures.”
— Kirkus Reviews