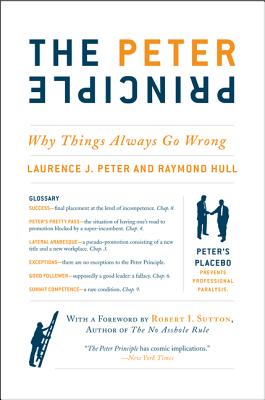 Back in 1969, Lawrence J. Peter created a cultural phenomenon  with his brilliant, outrageous, hilarious, and all-too-true treatise on business and life, The Peter Principle—and his words and theories are as true today as they were then. By posing—and answering—the eternal question, “Why do things always go wrong?” Peter explores the incompetence that runs so rampant through our society, our workplace, and our world in an outrageously funny yet honest and eye-opening manner. With a new foreword by Robert I. Sutton, bestselling author of The No Asshole Rule, this twenty-first century edition of Peter’s classic is set to shake up the business world all over again.

Laurence J. Peter was born in Canada and received an EdD from Washington State University. An experienced teacher, counselor, school psychologist, prison instructor, consultant, and university professor, he wrote articles for many journals and magazines as well as several books. He died in 1990.

Raymond Hull wrote many stage plays as well as articles for Punch, Maclean’s, and Esquire. He died in 1985.

“The Peter Principle has cosmic implications.” — The New York Times

“[The Peter Principle] has struck a throbbing public nerve... a minor cultural phenomenon and its title phrase, like Parkinson’s Law, is certain to enter the language.” — Life magazine