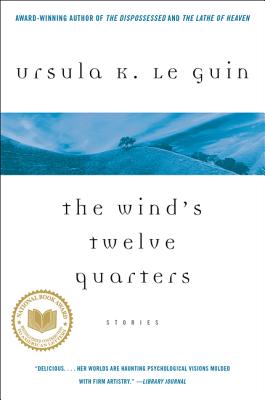 The recipient of numerous literary prizes, including the National Book Award, the Kafka Award, and the Pushcart Prize, Ursula K. Le Guin is renowned for her lyrical writing, rich characters, and diverse worlds. The Wind's Twelve Quarters collects seventeen powerful stories, each with an introduction by the author, ranging from fantasy to intriguing scientific concepts, from medieval settings to the future.

Including an insightful foreword by Le Guin, describing her experience, her inspirations, and her approach to writing, this stunning collection explores human values, relationships, and survival, and showcases the myriad talents of one of the most provocative writers of our time.

Ursula Kroeber Le Guin (1929-2018) was a celebrated author whose body of work includes 23 novels, 12 volumes of short stories, 11 volumes of poetry, 13 children’s books, five essay collections, and four works of translation. The breadth and imagination of her work earned her six Nebula Awards, seven Hugo Awards, and SFWA’s Grand Master, along with the PEN/Malamud and many other award. In 2014 she was awarded the National Book Foundation Medal for Distinguished Contribution to American Letters, and in 2016 joined the short list of authors to be published in their lifetimes by the Library of America.

“Le Guin’s prose is so very luminous and simple, and she always tells the truth, and when I’m with her people, I’m with living people, on worlds as solid and real as my own. Le Guin has a gift, which is to transform words into worlds.” — Molly Gloss

“A collection that begins with a fine story and gets better and better.” — Dallas News